Choice Cambodia A most enjoyable day again, Rudy and our new Khmer nurse Kunthea were very busy again, they removed the stitches from the man recently taken to Hospital, the wound has healed well and he is fine. Thanks to the many volunteers as well we had the company of 4 women from Taiwan and 1 from China, they supplied 300 pair of pants to the children as well as giving us 180 packets of noodles to add to the food supplies we handed out. Thanks to Rosa an English speaking Khmer who joined the translating team. Melanie once again did finger painting with the chidren in the 1st village this time, the children loved it as did the volunteer helpers who joined in, one village left to go Melanie. Thanks to Ben for the rice and to all the Volunteers that helped us this weekend. 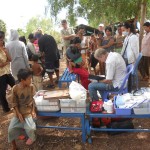 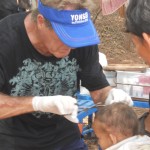 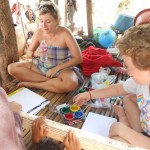 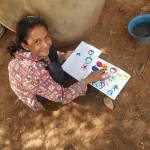 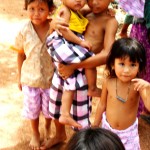 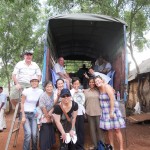 Choice Cambodia Friday 14th May and another clinic this time in the middle village. Dr. Mark in the foreground and Rudy, also before and after the operation photo’s, showing the leg of the villager transported to Hospital on 9th May. Meanwhile entertaining the children is Melanie, who by the way had more paint on herself than all the other children put together. another great day. 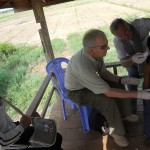 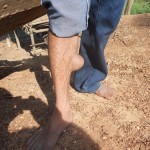 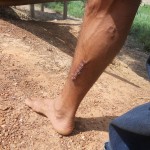 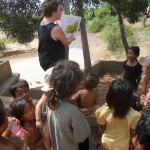 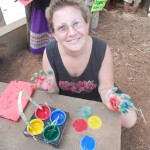 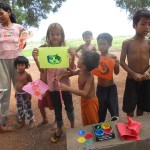 Choice Cambodia On Sunday the 9th of May 2010 we headed off to the furthest of our Villages with a medical team consisting of 2 American Doctors Emily and Mark, our Paramedic Rudy and 2 Khmer nurses. Also on board as volunteers were their partners and/or friends, James, Jane, Becky, Diana, Isaac, Dayna, Lisa, and David plus our regulars.
The medical crew set up and saw to all those needing attention as well as those we had selected on previous visits needing special attention.
Meanwhile the Volunteers distributed 80 Mosquito nets, 80 prepacked foodbags, 75 pair of Flip Flops donated by Diana and the Jones’s and around 300 clothing items donated by Lisa, we thank you very much for these. As well CHOICE would like to give a big thank you to Harvest Fellowship, Mark & Jane Truax for their very generous donation.
Most of the Villagers received minor treatment but one serious case was transported back with us to the hospital and given money by us for an operation to remove a large growth on his leg, we will follow up on his progress. “Blind man” will have a cataract operation in one eye in the near future, the other eye has been blinded by a bullet wound. Nothing else can be done for the young girl who’s eye was attacked by a chicken.
It was a very hard and long day but we were all pleased with the results. 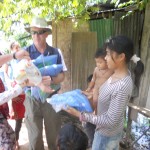 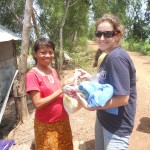 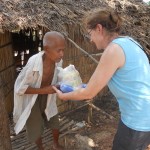 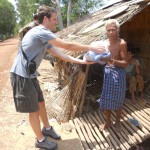 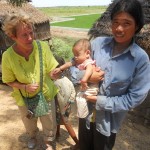 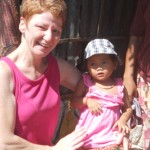 On Thursday 6th May we were invited by the Orphanage to join them on a medical clinic. After a 4 hour journey from Phnom Penh we arrived at a remote farming village about 1 hour south of Svay Rieng and close to the Vietnam boarder.  Rudy (CHOICE Paramedic) and Mark an American Doctor began their examination and treatment of the many who had gathered. Some 5 hours later and no less than 115 patients, they had finally finished. Fortunately there were no serious cases so the exhausted team began the long trip back to Phnom Penh, finally arriving at Chivas Shack at 11.30pm. 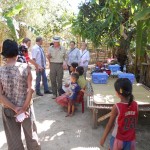 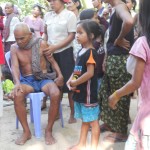 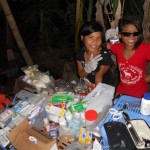 Village Trip You Tube Video
Please take a look at this video about our Village trip, produced in late April 2010 by Jurgen and Helga “Orangetrotter”http://www.youtube.com/watch?v=HXq0NtUjWA4

In April CHOICE members had the pleasure in meeting up with Helga and Jurgen. Using the name “Orangetrotter” they have travelled in their VW Bulli from Germany throughout Australia and are now travelling through Asia. They are meeting up with various Charities on their travels and documenting their experience with them on U TUBE. We wish “Orangetrotter, GEFRO and Friends” a big thank you for their generous donation and help at the Orphanage and Village trip on Sunday 25th April. and we wish them good luck for the remainder of their journey. For more information on their travels visit : http://www.orangetrotter.de/
The young girl pictured wearing the sunglasses has only recently been brought to our attention. She had been attacked in one eye by a chicken a long time ago, the eye was blinded and disfigured. We were told she always kept to herself and hid her face, embarrassed by the scarring, unaware of her presence until her parents asked CHOICE to provide her with sunglasses, the girl is very happy now she has them and we will keep her well supplied in the future. She will be seen by an American Dr. who will be visiting the Village soon, and we hope we can provide her with some treatment to improve her situation. 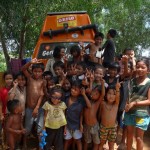 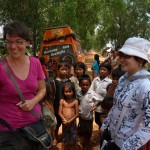 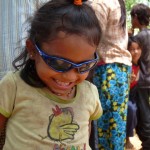 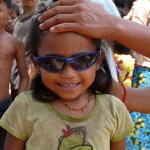 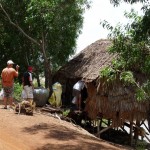 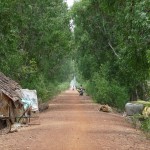 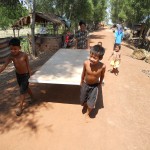 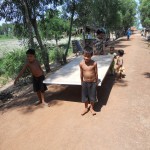 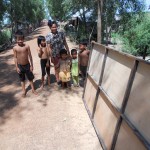 Many thanks to the friends of Angela who kindly donated 15 pallets, (10mil plywood on steel frames approx. 2.4m x 1.2m). They are used by the villagers for all sorts of things but mainly to provide solid flooring in their huts. CHOICE volunteers delivered them to the Village on Sunday 25th April 2010.