About 250 Australians with child sex convictions travelled to the Philippines last year, the Australian Federal Police (AFP) has revealed. 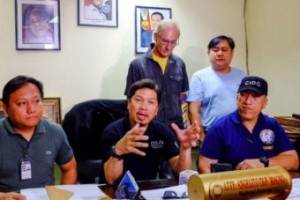 Filipino police are currently pursuing a case against Australian man Peter Gerard Scully for what they allege are some of the worst child sex offences in the nation’s history.
The AFP was involved in the investigation and arrest and says 250 known Australian child sex offenders travelled to the Philippines last year alone.
A spokesman has told the ABC that Australia alerts Filipino authorities when a sex offender boards a flight, but it is up to them whether to refuse entry.
Mr Scully, 51, who has no previous convictions for child sex abuse, was arrested and charged with sexually abusing 11 children aged between 18 months and 13 years.
He allegedly spent years sexually abusing and torturing young children and streaming his crimes online, where the AFP says he charged between $US100 and $US10,000 for the videos he filmed.
The Melbourne man has also been charged with the murder of one of his alleged victims, a 12-year-old girl, along with rape, torture, human trafficking and violating cyber laws.
On Saturday, authorities in the Philippines said Scully was working with foreign accomplices in his child pornography operation and launched a manhunt for four foreigners believed to be involved.
The Australian embassy held an emergency meeting late last week in relation to the case.
http://www.abc.net.au/news/2015-04-09/afp-250-australians-child-sex-convictions-travelled-philippines/6379794

I am posting the story above as I believe it’s both shocking and alarming in numbers, much higher than I thought. I guess that many more Australians without convictions are also living or travelling to the Philippines to target children. Add to this sex offenders from other countries visiting the Philippines. How many tens of thousands must be going to South East Asia and other Nations around the world each year.

These predators try to go unnoticed in their hunt for children by doing normal things a visitor does when overseas. Often child sex abusers seek out street children or get involved with activities where children can be met without drawing unnecessary attention. Last year a man from the UK and other foreigners were convicted of child sex crimes in a scheme involving children from an Orphanage in Seam Reap.

Charities working with children have always been a target for sex abusers, screening for good volunteers to help CHOICE is a very difficult task, the child sex abuser doesn’t have a big P on his forehead. We are a very small Charity, from 2006 I have had to ban about ten would be helpers, at the time I and others believed that five of these were paedophiles. Of those five, three are now convicted of child sex crimes and are currently in jail in Phnom Penh. As far as I know only one had prior convictions, all of them were targeting street children, a soft target. Why, because they present themselves to the abuser asking for money, they usually speak English.

As a child I was told “do not talk to strangers” this is a common message from parents to protect their children. I find it hard to understand that visitors often play, photograph, give food and money to Cambodian children on the street, when they are the total strangers. Though not intentional tourists are grooming these children for the sex offender. Tourists say they are just having fun with the kids without realizing the next person may well be a paedophile.

So what can we do? We can explain to friends and school groups visiting Cambodia, please avoid helping or visiting Orphanages, this message is slowly getting through. It’s also not acceptable to take an unknown child from the street for drinks or for a meal in your country, it’s no different in Cambodia. Please ignore the street kids, most are not poor, good Khmer families regardless of their income, do not allow their children to roam the streets alone. Cambodian children deserve a childhood and an education lets help them achieve this without exploitation, it’s about them not us.