On 3rd January 2014 we celebrated our second Birthday of the CHOICE Center. About 200 attended being 170 children and the rest made up of Staff and Volunteers. We decided to limit the celebration and not include the Villagers as it was too much work last year for the cooks and cleaner.
We had a lucky draw with about 20 prizes and special awards for the best achievers. Everyone had a great day and there was an extra celebration as it was Vanny’s birthday. 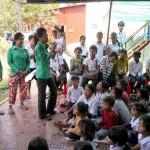 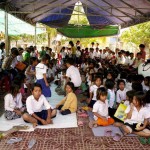 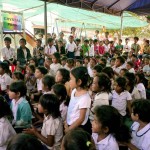 Founded by Ross Wright in 2006, Charitable Humanitarian Organization in Cambodia by Expats (CHOICE) works with the poorest of the poor: rural people who have no land, no property and no hope.

Squatters, they are subjected to the whims of the landowners and the government. A not-for-profit organization, all the money goes to those who need it. There are no salaries for foreigners as all labour is voluntary. Further, expenses such as housing and travel are covered by the individuals, rather than organizational funds.

The CHOICE centre includes a school, a kitchen, a sewing room – where young women learn a marketable skill – and a medical and dental clinic. In the morning the truck – which doubles as the water tanker – picks up the students. Divided into two groups, they go to a government school for half the day and then switch to learn English at the centre. Computers are part of the curriculum, “A volunteer couldn’t believe how quickly the kids here caught on to emails and building web sites.”commented Ross Wright, the Australian founder and energy behind CHOICE “He said they were more advanced than the students he taught in America.”

The CHOICE programme operates a water delivery service from the centre to two outreach settlements.   UNICEF dug wells in the villages; WHO tested the water and found it contained deadly traces of toxic chemicals, including arsenic and strychnine. Each family gets 60 liters of safe water a day from the tanker.“When we started delivering water, the health of the villagers improved noticeably in one day,” Ross shared. “The water looked clean, but it was literally killing them.”

“We call the villages No Truck, Cancer Man and Angela,” offered Ross. “The Khmer names are hard to pronounce and we don’t want foreigners hiring a car to come out and take a look around. It isn’t just like home and tourists could do a lot of damage by starting to give people money or not dividing things up evenly so everyone gets a share. If you have 10 books and 40 students it doesn’t work.”

After spending a day going out to the villages with CHOICE and seeing the projects first-hand, a representative from The Spring Fund handed Ross an envelope with a donation. Making a CHOICE to help sponsor this grass-roots organization was easy.

Many thanks to “Wheelchairs for Kids Inc.” from Australia for donating this special wheelchair for handicapped kids came complete with blanket and soft toy. This 4yo boy Visith Thar has been looking at the ceiling all his life if not being carried by mum or grandma. Now he can enjoy sitting and seeing much more, though he is totally brain damaged he appeared to enjoy receiving the chair. Thanks to Richard Linney (pictured) for contacting us and delivering the wheelchair. 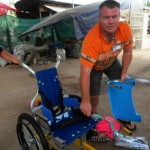 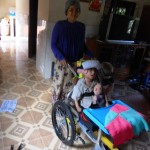 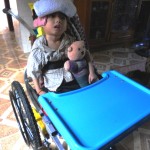 We are expanding, we are now renting the house next to the Choice center. We need a larger sewing room and room for the Hairdressing salon. Pictured is a prospective new manager Lida on the sewing machine, looking on is Arne Flick CFG and staff member. Arne will be co-ordinating the sewing project and will hopefully develop a market in Germany so our girls can work a 40 hour week with good pay and working conditions. 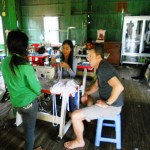 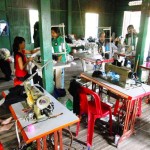 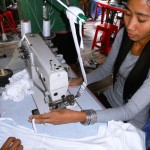