Forty five kindergarten children received their second free school uniform yesterday. The uniforms were made by our sewing students at the CHOICE center. 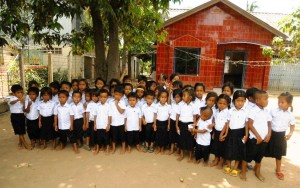 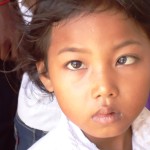 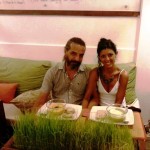 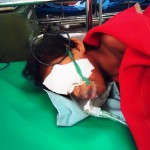 In Cambodia the Kings birthday was celebrated on the 13th, 14th & 15th May, so our school was closed. This gave us time to spend on medical issues, we took 7 villages to various Hospitals over these 3 days, several for eye issues. Six year old Mey Mey from our kindergarten class was one of these. As you can see she was originally cross eyed, volunteers Laurie and Max (pictured) offered to pay for corrective surgery and associated costs. We took Mey Mey to CSC Hospital which operated free of charge, so a US$100 donation was given.  Among others taken to CSC for tests was Tearith (pictured last), he is blind in one eye, further tests need to be done for him in six months time with the possibility of him receiving an artificial eye. 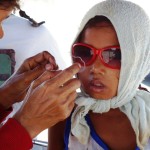 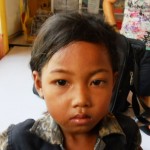 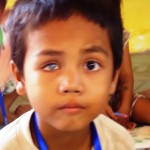 Many thanks to Steve Murray the founder of Georgia’s Children of the World and a Trustee of CHOICE Cambodia. Steve organized a fundraiser for CHOICE the “G-Festival 12” raising £10,000.  After completing our annual returns we are pleased to announce that GCW has donated £4,500 directly to CHOICE. Another £3,000 is still to come from GCW,  a further £1,000 was paid directly by Steve for various items and Medical, Dental, Transport needs. The remaining balance being kept aside for the running of “G-Festival 13.”

We look forward to continued support from Steve and GCW in the future, and thank all of the people involved in the running of G-Festival and their donors.

The English/German classroom at the CHOICE Center respectively named Georgia’s House in memory of Steves daughter.

Leanne Balkin, brother Tony and friends Kate and Sheree from the Narrabeen community in Australia organised the “Narrabeen Caring for Cambodia” fundraiser. It was a great hit, everyone had a great night and enjoyed the dinner and the band “MicRo”. The fundraiser was held at the North Narrabeen surf life saving club, together with a raffle run, raised $9677.00. We would like to thank everyone that gave very generously also the people that could not attend still donated. To those that donated the fantastic prizes, the Micro band we thank you very much, you made it a success and a great fun night. The money raised has been sent to CHOICE Cambodia and will help the extremely disadvantaged children that this organization care for.

Secretary of CHOICE Cambodia: We really appreciate the efforts of those involved in this event. We provide much care and support to the extremely disadvantaged people here in Cambodia, we only help the one’s that have fallen through the cracks. We operate on a shoe string budget and all the money goes to the course. With fundraisers such as this we can continue, I sincerely thank all those involved, Ross. 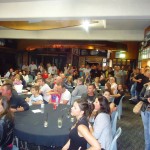 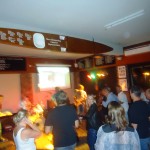 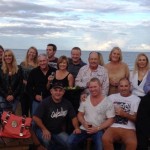