The young burnt boy has been released from Hospital and has gone home to his Village.
You may recall that firstly he had a severe case of Shingles, then after recovering from that he accidentally tipped a large pot of boiling water over himself.
After 2 months in Hospital he has been released, though his wounds are much better he is left with terrible scarring.
CHOICE  supported the boy and the family throughout this ordeal. 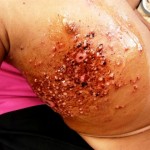 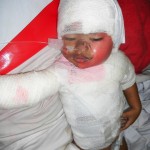